There are many species of wasps in the UK - sandwasps, digger wasps, potters, masons, spider-hunters, hornets and the ubiquitous common wasps. The latter are the species described here.

Very often mistaken for Honey Bees, the Wasp is distinctly different in its shape and markings having thin bright yellow legs and yellow stripe's across its abdomen. They are generally longer and thinner looking than the Honey Bee but are overall a larger insect measuring about 20mm. While at rest the Wasp folds its wings along their length giving the impression of thin wings. Their flight is less controlled emitting a soft buzz compared to that of the Honey or Bumble Bee. They are readily more aggressive than the bees and unlike bees the females have the ability to sting again and again, the slightly larger males are stingless.

The three species mentioned are very similar in size and shape and are commonly found throughout the countryside and can often be regarded as a pest around human habitation due to their attraction to sweet things and readiness to sting. The distinction between them can only be made by close up observation of the head markings (not advisable with a living specimen!) and their living quarters, the first two are underground dwellers while the third is a tree dweller. They have an omnivorous diet feeding on fruits, nectar, carrion, but mostly small insects such as aphids. Wasps bear similarities to Bumble Bees in their life history, only the fertilised young queens that find suitable winter hibernation survive while the rest including the old queen die of cold. 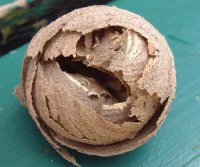 The nests of V. vulgaris V. germanica are constructed in the ground or outhouses in different stages, firstly by the queen using chewed wood pulp and saliva to make a small golf ball sized nest for her first brood. She deposits a single layer of eggs inside on a small comb of cells and works hard at feeding the young grubs with chewed up flies.

The young workers emerge in about four weeks after laying and quickly take over all the colony duties of nest and cell building, food collection and the care of further hatching brood. The Queen having done all the early preparatory work on the nest is now simply left to do all the egg laying. 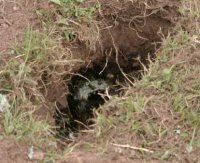 The workers continue to extend the nest in size, making room for the queen to lay more eggs, until the end of summer when it may have reached the size of a football and can contain up to 2000 workers. This is difficult to imagine underground but is similar in size to the more obvious V. sylvestris seen here which builds the same type of structure only hanging from the limb of a tree.

Once the season ends at the end of summer when the temperatures begin to fall a fresh generation of males and females are produced. They leave the nest to mate, the young fertilised queens search for hibernation opportunities and the males along with the rest of the original nest die off in the colder weather. As spring arrives and the temperatures rise the surviving young queens begin the task of starting a new colony all over again.

The Giant Woodwasp, sometimes known as the Horntail Wasp, is a large insect (4-6 cm) related to the true wasps, but despite its fearsome looks it is completely harmless and unable to sting. The needle-like projection at it's tail, often mistaken for a sting, is in fact an ovipositor, used to lay its eggs in soft wood such as dead or decaying timber. The female uses the saw tipped ovipositor to bore into wood, where she lays her eggs and deposits a secretion containing fungal spores which break down the wood so it can be consumed by the larva after hatching.

Larval development can take a long time, from 10 months to 5 years, depending on the condition of the wood and the prevailing weather. When mature they knaw their way out. Once flying they make a rattling sound much like a toy windmill. They are not considered a nuiscance as they mostly use trees already dead or weakened by other pests and diseases.

Found throughout the UK, interestingly they were commonplace down coal mines, crawling out if the timber pit props in the warm underground environment. 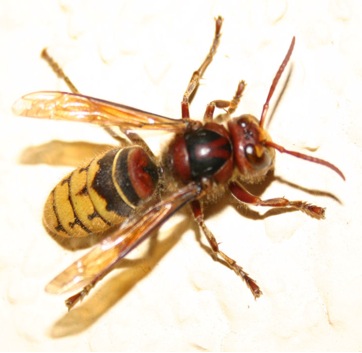 In contrast the Hornet (V. crabro), is a large fearsome looking insect, the workers being larger than the largest wasp queen. It is in fact a relatively docile and much rarer insect and is probably much maligned because of its size. Its life history is similar to that of the common tree wasp (V. sylvestris), building a large nest in a tree. Its occurrence is mostly in the southern regions of the UK where the climate is milder. Perhaps as global warming progresses we will see more of this species venturing further north into Scotland.

Bumble Bee's and honey Bee's have suffered from habitat loss through farming practises and general manicuring of the countryside. They are often regarded as pests and can be so in domestic situations, however they do play a particular role in aphid control. They are not endangered and their numbers fluctuate from year to year depending on the severity of winter.